From 1969 to 1970, Earle Toppings, broadcaster and editor at the Ontario Institute for Education (OISE), organized a series of interviews and recordings with 16 Canadian authors for use as a resource in high schools and colleges.

On December 14, 1970, James Reaney met interviewer Earle Toppings and asked that his recording session for the Canadian Poets on Tape series be recorded at a piano, and fortunately the basement studio of the OISE building in Toronto had one. Reaney then played musical excerpts (for example, “Beulah Land” and “The Maple Leaf Rag”) and also read poems from The Red Heart, A Suit of Nettles, Twelve Letters to a Small Town, Night Blooming Cereus, The Dance of Death at London, Ontario, One Man Masque, and Colours in the Dark. He begins this way:

[Reaney performs “Beulah Land,” a fragment of an old hymn, on the piano.]

That’s the first poem I ever heard, at an early denominational Sunday school. I’m sitting at a piano on Bloor Street near a subway that you’ll hear thundering by occasionally, and I’ve got… sort of… my collected works around me. I’m going to read from The Red Heart first of all, and I’m going to occasionally call forth from the piano pieces of music that really make a comment on the poems in a sort of way. […] [See pages 286-287.]

♦ A special evening to launch the book will be held on October 5 from 6-8 pm at the EJ Pratt Library, 71 Queen’s Park Crescent East, Toronto, Ontario.

♦ Digital copies of Earle Toppings’s original recordings are available at the Victoria University Special Collections at the University of Toronto.

♦ Literary Titans Revisited: The Earle Toppings Interviews with CanLit Poets and Writers of the Sixties is available from Dundurn Press. 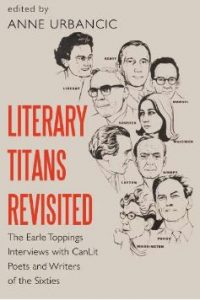