For a full appreciation of John Beckwith’s life and music, see his son Larry Beckwith’s tribute in Opera Canada: https://operacanada.ca/march-9-1927-december-5-2022-canadian-composer-john-beckwith/

For more about John Beckwith’s life and career, see his autobiography Unheard Of: Memoirs of a Canadian Composer from 2012.

The John Beckwith Songbook concert was held in honour of his 94th birthday in March 2021.

((( 0 ))) You can stream archived recordings of John Beckwith’s music at the Canadian Music Centre:
https://collections.cmccanada.org/final/Portal/Composer-Showcase.aspx?lang=en-CA

Daisy’s Aria from John Beckwith and James Reaney’s 1982 opera The Shivaree is now part of a two-volume anthology of soprano arias from Canadian operas produced by Counterpoint Music Library Services.

Based on the work of soprano Dr. Stephanie Nakagawa, the two-volume anthology is a resource for singers and performance companies and features selections from 21 Canadian operas.

In collaboration with the Canadian Music Centre, Dr. Nakagawa plans to create anthologies for each voice type.

Daisy’s Aria from The Shivaree

In The Shivaree, Daisy is abandoned by her lover Jonathan and accepts the marriage proposal of a much older man, William Quartz. The story gives a Canadian rural setting to the Greek myth of Persephone borne off by Hades. In the aria, Daisy regrets marrying Mr. Quartz and longs for Jonathan to rescue her.

Daisy: Oh Jonathan, why have you forsaken me? Is there still time – to take me away?

ARIA
Jonathan, you were a strange young man.
You never could decide if I was yours,
So Jonathan, I tried to make you decide
By letting Mr. Quartz keep company with me.
But if flowers and leaves keep company with winter,
They soon find they’re stabbed with an icy splinter.
My heart’s like the lane and the fields in fall,
Rusting and stiffening with cold until all
Lies buried in colourless snow,
Jonathan!
Walk above the snow
Where the garden was —
Walk above the snow
That covers me up,
Jonathan!
That covers me o’er.

Join us on Sunday March 7 for The John Beckwith Songbook — a concert celebrating the music of Canadian composer John Beckwith in honour of his 94th birthday.

Presented on the Confluence Concerts You Tube Channel, this celebration of John Beckwith’s song repertoire features three programs encompassing nearly all of his music for solo voice, including folksongs and songs set to poems by ee cummings, Miriam Waddington, and Colleen Thibaudeau.

The programs premiere at 2:00, 5:00, and 8:00 pm EST on March 7 and will be available on YouTube until March 21: https://www.youtube.com/c/ConfluenceConcerts

For more about the concert and John Beckwith’s music, see William Littler’s article in The Peterborough Examiner. John Beckwith shared this story about collaborating with James Reaney:

“Jamie lived in London and I lived in Toronto so our collaboration was almost exclusively through correspondence,” he recalls. The composer Richard Strauss and his librettist Hugo von Hofmannsthal carried on their famous collaboration much the same way. And like Strauss and Hofmannsthal, Beckwith and Reaney had their disagreements: “I wanted the leading character in our first opera to have a cat,” recalls Beckwith. Reaney replied tersely: “Cut the cat.”

Advice for potential opera composers? “You have to get a good book or you won’t have an opera. I’ve had students come up to me asking ‘What should I do for words?’ I tell them to get to know some writers.”

February 23, 2017 — The University of Toronto Opera Division honoured composer John Beckwith with an evening of music from four of his operas — The Shivaree, Night Blooming Cereus, Crazy to Kill, and Taptoo! — all with librettos by James Reaney. The concert was held at the Arts and Letters Club of Toronto.

On March 8, the University of Toronto Faculty of Music held a 90th birthday celebration for former dean John Beckwith, and he presented a lecture on Canadian music since 1967. Congratulations on your 90th, John!

♦ On March 23 his Fractions for microtonal piano and string quartet (2006) will be performed at Schulich Hall, McGill University.

♦ On April 28, New Music Concerts in Toronto will present a program he is curating, featuring his Avowals (1985) and the premières of two mixed instrumentation chamber works: Quintet (2015) and Calling (2016).

Join us on Saturday November 5 at 4:30 pm at Museum London to hear composer John Beckwith speak about his 40-year collaboration with poet and dramatist James Reaney.

John Beckwith and James Reaney became friends during their student days at the University of Toronto in 1946, and a shared love of music drew them to collaborate on several operas, plays, and musical collages. Four operas Night Blooming Cereus (1959), The Shivaree (1982), Crazy to Kill (1988), and Taptoo! (1994) are among the most notable. 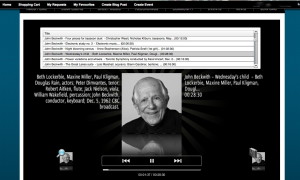 James Reaney was fortunate to have composer John Beckwith set many of his poems to music: The Great Lakes Suite, A Message to Winnipeg, and Twelve Letters to a Small Town. Beckwith and Reaney also collaborated on longer operas Night-blooming Cereus, The Shivaree, and Crazy to Kill.

To listen to original recordings of Beckwith-Reaney works, visit the Canadian Music Centre‘s Composer Showcase and  set up an account – it’s free!

Note from Susan Reaney: In his new memoir, Unheard Of: Memoirs of a Canadian Composer,  John Beckwith recalls his career as a composer, including his collaborations with James Reaney. The book is available from Wilfrid Laurier University Press.

Thank you and congratulations to all the fine musicians and singers who performed Taptoo! so splendidly last month at the Jane Mallett Theatre at the St. Lawrence Centre for the Arts in Toronto.  Your spirited performances brought the characters to life.

Thank you, Larry Beckwith, for conducting and directing the orchestra and singers so well. And thank you, Guillermo Silva-Marin, General Director of Toronto Operetta Theatre, for making the premiere of John Beckwith and James Reaney’s work possible. We wish you every success in the future.

James Reaney and John Beckwith developed Taptoo! in 1994, when it had a workshop reading at Historic Fort York. Before this professional production (February 24-26, 2012), there were two presentations of Taptoo! by the students of McGill University (1999) and by the opera division of the University of Toronto Faculty of Music (2003).

In his new memoir, Unheard Of: Memoirs of a Canadian Composer,  John Beckwith recalls his life as a composer, including his collaborations with James Reaney. The book is available from Wilfrid Laurier University Press.

On February 24-26 next month in Toronto, the Toronto Operetta Theatre will present the premiere of Taptoo!, an opera in two acts, libretto by James Reaney and music by John Beckwith.

The opera is based on events surrounding the founding of the town of York, Upper Canada (now Toronto), roughly from 1780-1810. Using real historical characters like Major John Graves Simcoe as well as imaginary ones, the story tells how a Quaker family, the Harples, flee America to Canada to escape mob violence:

MOB: Take off your hat
To the emblem of our state,
Our state, our state!

JESSE: Friends, I will
Take off my hat
To neither king nor republic
Nor a flag, nor a …

JESSE: Yes. Freedom from all oppressors
Kings or — mobs like yourselves!

MOB: (shouting in unison)
Take off your hat!

(Jesse does not move. Pause, then sudden quick action as they seize him.)

MOB: Tar and feather him!
Seize that tub,
Burn that little flag there!

In a recent article about his collaboration with James Reaney, John Beckwith describes the music of Taptoo! “as the modern equivalent of a ballad opera, in which scraps of familiar songs and dances would now and then drift in to the musical score. I included about 20 such musical references — hymn tunes, popular sentimental or patriotic songs, dances, marches and, of course, historical military music.”*

Order your tickets here from the St. Lawrence Centre box office, or

The full libretto for James Reaney’s Taptoo! is available in Scripts: Librettos for Operas and Other Musical Works, published by Coach House Books.

Congratulations to the singers and musicians who performed James Reaney and John Beckwith’s opera “Crazy to Kill” last weekend in Toronto, November 11-12, a Toronto Masque Theatre production. Here’s a rave review from some members of your enthusiastic audience:

We thought the production was fantastic! The opera singers can truly add “puppeteers” to their CV’s.

Loved the way everyone moved about the stage — when Agatha slowly drifted past us, it made us part of the story.  A great set, with many levels (“rings”).

Loved the opening sewing scene when Agatha mimed the old treadle — and the sound effect, a great idea! Also loved her expressive face peering through the bed pillow — another great idea.
The two musicians, Greg Oh (piano) and Ed Reifel (percussion), sounded like a full orchestra. We loved how they were in costume and part of the story!

You must all be exhausted, but also pleased that it was such a success. Jamie would have been delighted.

This month Toronto Masque Theatre presents James Reaney and John Beckwith’s opera Crazy to Kill, which was first performed in 1989.

Based on Ann Cardwell’s 1941 mystery novel about a series of murders in a mental asylum, the opera has 22 roles and requires three singers, two actors, and 18 puppets. In this production, David Ferry directs mezzo-soprano Kimberly Barber as Agatha, soprano Shannon Mercer as Mme. Dupont, Doug MacNaughton as Detective Fry, and actors Ingrid Doucet and Brendan Wall.

You can order tickets online from Toronto Masque Theatre. See you there!