James Reaney’s adaptation of Lewis Carroll’s Alice Through the Looking-Glass opens at the Manitoba Theatre Centre at the John Hirsch Mainstage this month on November 25 to December 19.

Originally directed by Jillian Keiley, this production was a hit at last summer’s Stratford Festival and  has now played in Ottawa at the National Arts Centre and in Charlottetown at the Confederation Centre of the Arts.

Christine Brubaker is the director of the Manitoba Theatre Centre’s production. After Winnipeg, Alice’s next stop is the Citadel Theatre in Edmonton, February 27 to March 20, 2016.

♦ Not to be missed! Special “Monday Mix” pre-show chat on December 7

♥ What reviewers are saying: “Manitoba actors and brilliant visuals make it a must to visit Alice!” — Randall King in The Winnipeg Free Press

♥ Gwendolyn Collins on playing Alice: “I think Alice has rubbed off on me a little.“ — The Winnipeg Free Press 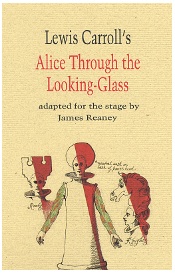 Lewis Carroll’s Alice Through the Looking-Glass: adapted for the stage by James Reaney is available from the Porcupine’s Quill.