Thanks to Brick Books, you can now hear Jeff Culbert reading poems by  James Reaney from Souwesto Home (2005) and One-man Masque (1960). 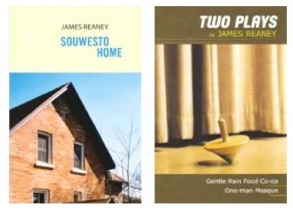 Listen to Jeff Culbert read a selection of poems here:

Actor and director Jeff Culbert performed One-man Masque and directed James Reaney’s 1997 play Gentle Rain Food Co-op on November 21-30, 2002 at the Grand Theatre (McManus Studio) in London, Ontario. In the preface to his book, Two Plays, James Reaney shared his enthusiasm for Jeff Culbert: “His superb work as both director and performer moved the audiences at seven performances… to stand-ups, tears, laughter, and exclamations. There were even screams for the last image of One-man Masque when Jeff took a tray of five candles, lit them, and balanced the tray on his head! It was electrifying.”