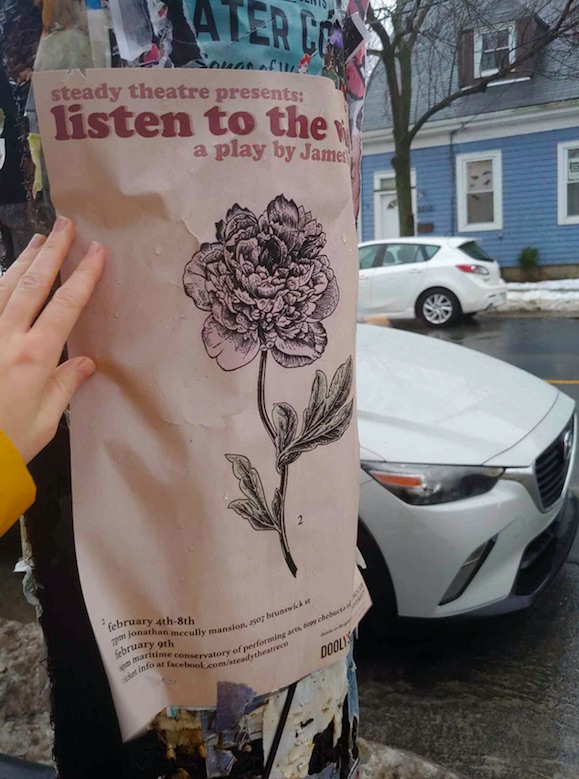 February 5, 2020 — Congratulations to Steady Theatre Collective and director Julia Schultz for your ingenious production of James Reaney’s 1966 play Listen to the Wind.

The production was staged at McCully House, an old Halifax mansion, allowing the audience to move through the house and through the play – Act I in the attic, down to the lower floor for Act II, and back up to the attic for Act III.

The web of actors, music, and intimate setting kept us close to the action and drew us into the world of Owen, Harriet, Ann, and Jenny, the four children who put on the play. Four chairs can be anything!

OWEN: … Mitch, sit down and talk to me.
MITCH: Will I do your favourite cartoon?
OWEN: Yes. Now you rock in the rocking chair and I say… (gets off the bed)
Grandma, how about  a dime so I can get an ice cream cone and cool myself off?
MITCH: Ah, I’ll tell you a ghost story instead son. It’ll freeze your bones and chill you off twice as fast. Listen!

More about Steady Theatre Collective and the play

What reviewers are saying:

The Way I See It Theatre Blog: http://www.twisitheatreblog.com/take-a-moment-to-listen-to-the-wind/

For more about the play, see “James Reaney’s Listen to the Wind in Halifax February 4-9”: https://jamesreaney.com/2020/01/25/james-reaneys-listen-to-the-wind-in-halifax-february-4-9/