A new London production of The Easter Egg runs May 24 to June 1 in London, Ontario, produced by the Alvego Root Theatre Company and directed by Jason Rip. Here are James Stewart Reaney’s thoughts on his father’s play.

My father never really tired of hatching new ways to stay on message about The Easter Egg.

When James Reaney was given the chance to talk about the play, a 1962 comedy, he always worked in important details. The Easter Egg was a “neat, tidy” play with a few characters and it was relatively short.

“All I was trying to do, at the time, was create a short, little play with only a few characters.” he told former Free Press colleague Noel Gallagher decades after the play’s premiere at Toronto.

The occasion was the 2002 revival of The Easter Egg by a Toronto company. Their production came to London the next year.

Back in the 1970s, he had used that “neat, tidy” phrase to describe the play he wanted to write for a favourite director and collaborator, the late Pamela Terry.

Once, when we talked about it, he said he had wanted to answer critics who said he could only write a drama on the long and epic scale of The Killdeer, his first major play. Still, short in stage time meant coming in at 113 minutes — by his count — Easter Egg intermissions not included. He also wanted to write something absurdist, where “things just happened.”

These thoughts, and more, have been swirling around on the eve of a new London production of The Easter Egg. The AlvegoRoot company staging opens May 24.

Eagerly anticipated in My London, the 2013 production follows at least two other Easter Eggs here. The Free Press reviewer in 1967, Helen Wallace said: “The Summer Theatre production . . . tells a story, on its most superficial level, of a mentally disturbed boy (Kenneth Ralph) hidden away so his stepmother (Bethel Henry) can claim his inheritance . . . the psychiatric tangle of a 20th-century Cinderella theme is twisted against the secret Victorian shame of a ‘different’ child who has to be hidden away.”

That perceptive comment accounts for the play’s basic conflict. On Kenneth’s side are Bethel’s stepdaughter Pollex (Polly) Henry and Dr. Ira Hill, who is pursuing Bethel. Tending to ally himself with stepmonsterish Bethel is the Rev. George Sloan. The faith leader really should be standing by Polly because they’re engaged, more or less. The cruel and weak Sloan is probably overwhelmed by the endlessly comic caustic chatter from the tireless schemer Bethel.

“Among other mysterious elements in the mix are the bat (‘a flying mouse’) that stalks the house; a young girl’s ghost haunting the garden; a cat’s skeleton and a metal box containing a glass Easter egg,” Gallagher wrote in his review of a 2003 production. True — and it was an Easter egg from my father’s beloved collection which served as a prop all the way back in the Terry-helmed 1962 debut.

Re-reading Gallagher’s story from 2002 makes me smile because, as an interviewer, he drew out charming and characteristic details.

“Easter Egg’s still one of my favourite plays because it mentions Paradise, Manitoba, which is where my father once worked as a farmhand,” my father said at one point.

Then, there was his loyal salute to the play’s successful world premiere at Toronto’s Alumnae Theatre in 1962. Just as typical and true to my father’s character was his brusque dismissal of an Ottawa production soon after as “a dreadful failure.” That comment carries the eye-watering sting of burned-bridge aroma No. 1 — guaranteed to linger forever.

Best of all is his praise, wearing the mask of the practical playwright, for the 1964 version staged by a United Church group in Woodstock. “They were raising money to build a gymnasium and The Easter Egg helped them reach their goal,” my father said.

What: Revival of The Easter Egg by London poet and playwright James Reaney (1926-2008) by AlvegoRoot Theatre Company. 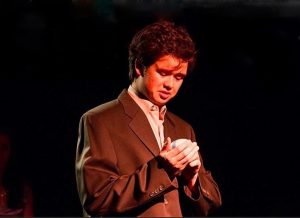 “A Canadian Classic. The Easter Egg starts with Gothic darkness and builds to a beautiful conclusion of new beginnings.” — AlvegoRoot

When: Opens Friday, 8 pm and continues to June 1.

Here’s a selected look at past presentations of The Easter Egg in London:

For more about the 1967 production of The Easter Egg at Talbot College, see JBNBlog. For a review of AlvegoRoot’s The Easter Egg, see The Beat Magazine.