Actor and director David Ferry is a Guest Artist at Bishop’s University in Sherbrooke, Quebec, and he sends this good news about his work with the students of Bishop′s Drama Department:

Here′s a photo [from a scene in Act I] for your website — this is the first time we all got the Jacob′s ladders together in rehearsal! 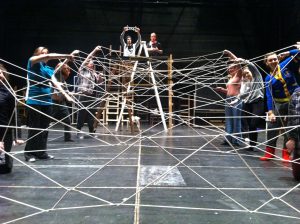 James Reaney′s Sticks and Stones will be presented from March 14-18 at Bishop’s University. Our best wishes to the director, cast, and crew for a successful production!

Update March 17, 2013: David Ferry had this to say about the play’s opening night:

—Well it was a smash opening… gotta say the students so embraced the piece.

And ironically… we lost an actor day before opening, so guess who went on as Pat Farl and Donavan and others?

It was so weird saying those lines, dancing that fight (all off book by the way) in that play 40 years later, which I had also directed.

At the end of the third act dream sequence, after Mrs Donnelly says “Jennie, your father and I will never leave Biddulph.” we freeze frame on that snap shot and then from the gods two dead oak leaves float to the ground…”dead leaf, float light”

It is a special moment. 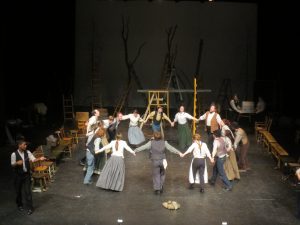 Here are David Ferry’s program notes from Sticks and Stones:

James Reaney’s famous “Donnelly Trilogy” is arguably the greatest piece of English Canadian dramatic writing to have ever been produced in our professional theatre. Along with Michel Tremblay’s “Les Belles-soeurs” it became one of the few truly breakthrough pieces in our Canadian theatrical his/herstory. Certainly it was the crowning achievement in Reaney’s storied career.

When “Sticks and Stones, The Donnellys, Part One” first opened at Tarragon Theatre in Toronto in 1973, its effect on the theatrical life of the city and country was profound. As the Toronto Star opined, it was “just plain overwhelming.” Its success led to the production of the next two parts of the trilogy the following season at Tarragon, “St. Nicholas Hotel” and “Handcuffs”, and then all three plays toured from sea to sea.

As a young actor in that original “Sticks and Stones” forty years ago, I was in so many ways formed as an artist by that experience, and I still self-identify as a Reaney-ite. Doing the Donnelly plays certainly confirmed me in my nationalism. A close look at the plays will reveal what a breathtaking view Reaney had of his country. He doesn’t merely write about an infamous event in our past… the slaughter of the Donnellys by vigilantes in 1880s South Western Ontario… he writes about the creation of a new world and how the tendrils of the old world wrapped around its ankles and tried to pull, pull it down. Back into the past.

In “Sticks and Stones” Reaney  champions a family led by an extraordinary woman (Judith Donnelly) of vision and spirit. The play becomes in no small part a champion of this proto-feminist heroine.

While many of the Donnellys’ neighbours came with them from Ireland to settle in Biddulph County (around the town of Lucan,) few of them had the courage, nobility and determination of the Donnellys to create a new life that turned its back on the sectarian violence and prejudice of the Old Sod. Judith and James Donnelly were determined to start a new life that rejected the rules of the old world.

They chose their friends not by political allegiance or faith but by the strength of that person’s integrity and spirit. They set out to build a farm and a family that could grow without limitations. They taught their children to hold their heads up high. And the children did.

The Donnelly story, in Reaney’s hands, tells us of the evolution of a nation… starting with the agrarian society of those early farmer immigrants from Ireland, moving through the development of early commercialism and industry, to a political culture where the Church and political parties divided and conquered to form a modern Canada.

Reaney’s stage craft in telling HIS story is every bit as startling as his analysis of the evolution of Southwesto society.

As early as 1964 Reaney called for a National theatre that should be created in big wooden-floored rooms across the country; likely Orangemen halls or Masonic temples or Fisherman Union halls on non-meeting nights. He discussed in his 1960s journal “Alphabet” an approach ‘towards a poor theatre’ (before Grotowski) as well as an ’empty space’ and ‘Holy Theatre’ (before Brook). His plays broke through the fourth wall of Naturalism very early on in Canadian theatre, and his plays such as “Listen to the Wind” and ” Colours in the Dark” (Stratford Festival) are the antithesis of the kitchen sink naturalism of David French and others.

His stage is filled with the iconography of ladders, wheels, spinning tops, cats cradles, sticks and stones.

It may be challenging for you, the Audience, to make sense of Reaney’s story in a linear way.

It is, perhaps, best to sit back and allow the images and poetry to wash over you and overwhelm you.

Reaney once wrote that the writer’s objective should be to scratch though the bark of “local” in order to arrive at the “universal.”

With “Sticks and Stones” I believe Reaney arrived. In spades.

David Ferry was one of the original cast members of James Reaney’s The Donnellys Part I, Sticks and Stones, which was first performed at the Tarragon Theatre in Toronto, Ontario on November 24, 1973.

Recently David edited a collection of plays by James Reaney for Playwrights Canada Press: Reaney Days in the West Room: Plays of James Reaney. Seven of James Reaney’s plays are in the book, including The Killdeer, Names and Nicknames, Listen to the Wind, The St. Nicholas Hotel, Gyroscope, Alice Through the Looking-Glass, and Zamorna!