Old men love the sun.
My Grandfather, eighty four,
in black bowler,
black overcoat,
in the same chair
through Spring, Summer and Fall
always against the same white-washed wall
sat soaking up the sun.
Hands spread on his knees—
Skin like dried guts
cracked with veins like the indigo ink
he dipped his pen in to write
in velvet covered, silver-locked ledgers.

Dozing in the sun
his skin drew the heat
till he seemed to glow
like a black swathed mummy
of a gold-leafed Pharaoh. 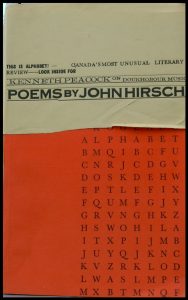 John Hirsch (1930-1989) lost his family in the Holocaust and came to Winnipeg, Canada as a war orphan in 1947. With the help of his foster family, he pursued his love of the theatre and became one of Canada’s most renowned directors. John Hirsch directed James Reaney’s play Names and Nicknames at the Manitoba Theatre Centre in Winnipeg in October, 1963.

Earlier this summer at the Stratford Festival, Alon Nashman performed his one-man play Hirsch, a tribute to this inspiring director. For more about John Hirsch, see A Fiery Soul: The Life and Theatrical Times of John Hirsch, by Fraidie Martz and Andrew Wilson.