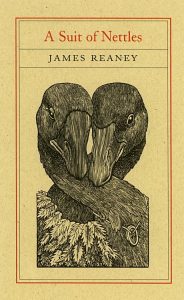 Richard Stingle, a long-time friend and colleague of James Reaney, has kindly given us permission to share his talk about A Suit of Nettles, which he presented at the book launch on May 25, 2010 in London, Ontario. (A new edition of A Suit of Nettles is available from The Porcupine’s Quill.)

A learned poet writes A Suit of Nettles

In 1948, Jamie, Colleen and I were graduated from the Honours English programme at the University of Toronto, a programme that was centred on learning in several different areas of the Humanities.  Ironically, in that same year of 1948, a history of English literature, edited by A. C. Baugh, included a study of eighteenth-century literature in which George Sherburn states that

“At the beginning of Alexander Pope’s career a hostile critic could assure him: ‘You have not that sufficient learning necessary to make a poet.’  The idea of learning as essential to a poet perished in the eighteenth century.  Stephen Duck, the thresher poet, Anne Yearsley, the milkmaid and Thomas Chatterton all aspired to the role of natural genius — and to the grief of possible sponsors seemed deficient in quality.”

“Gie me a spark o’ Nature’s fire,
That’s a’ the learning I desire;
Then, though I drudge thro dub and mire
At pleugh or cart,
My Muse, tho hamely in attire,
May touch the heart.

But surely Sherburn overstated the case in saying that learning was no longer essential.  As Jay Macpherson has rightly said, Jamie was “of the learned kind of poet.”  The tension between those in the learned tradition and those who confine poetry to the theme and language of the inspired “common man” has continued for two centuries and sometimes within the same poet.  Wordsworth may champion the language such as men do use but proceeds to pull out all the stops of the epic in The Prelude and The Excursion.  Tennyson’s preface The Epic has one character destroying his own attempt at epic, “Why take the style of those heroic times” (34), “And why should any man/Remodel models” (35-36).  But Tennyson immediately proceeds to remodel Morte d’Arthur and later the whole Arthurian epic in Idylls of the King.  William Morris also remodeled Nordic epic in his Sigurd the Volsung and Yeats, Joyce, Pound and Eliot continued this process as well.  And Jamie was, as Germaine Warkentin has also affirmed, a learned poet.

A Canadian poet said once of Jamie that he was a poet (especially in the lyrical first volume of The Red Heart), but Northrop Frye killed him.  This was nonsense.  Frye and Jamie were both products of the old Honours programme at the University of Toronto.  In Honours English, the student took nine courses in each year and reinforced his central study (English) with courses in three other Honours areas: in Frye’s case, Latin, Greek and Philosophy; in Jamie’s case, Latin, Greek and History.  Both men were also very competent in playing the piano.  I remember Jamie’s playing Bach, Debussy and his own “Penny Arcade.”  And Jamie was painting while Frye was writing on painting in Canadian Forum.  It is true that at first Jamie thought that the Modern era was slighted in the Honours programme (as it was) and that concepts were emphasized over the metaphors of mythos (as they were), but when Jamie went to teach at the University of Manitoba in 1949, he filled out what he had found lacking.  He eagerly read Frye’s Fearful Symmetry, studied Blake and was writing furiously and telescoping his development in forms from lyric to epic to drama.  When, a couple of years later, I joined him teaching in Winnipeg, Jamie was developing as a learned poet, and beginning to work with John Hirsch and Tom Hendry.  Like Virgil, Spenser and Pope,  who all began by writing pastoral eclogues, he was beginning to write dialogues combining romance and satire in his remodeling of Spenser’s Shepherd’s Calendar and, like Virgil, Spenser and Pope, he proceeded to writing epic works.  In A Suit of Nettles, he was already becoming more complex, in entwining the eclogue with that very Canadian genre, the beast-fable, used by Ernest Thompson Seton, Sir Charles D. Roberts and others, the most recent being Yann Martel.  As in the Canadian version of the form, Jamie’s geese remain geese as well as acting out human ideas, as Jim Westergard’s engravings in the new issue show.  Jamie was, of course, adapting the folk-tale of The Seven Swans of the Brothers Grimm for the central metaphor of Branwell’s suit of nettles and the unchanged swan’s wing.

In the mid-fifties Jamie went back to Toronto, to strengthen his professional position with a Ph.D., but even more to bring all that he had learned and experienced earlier into Frye’s liberating idea that all literature is made out of literature, all art out of art.  As Frye wrote in Myth and Freedom (1985):  “But we can never understand the poet’s authority without Vico’s principles of verum factum, that reality is in the world we make and not in the world we stare at” (122).  Frye’s modal criticism (Romance, Irony, Tragedy and Comedy) allowed Jamie to shape and contain what he knew into circles that become so important in Jamie’s work.  He studied Blake with Frye, and wrote his Ph.D. dissertation, “Spenser’s Influence on Yeats,” under Frye’s direction.

Within the whirling circle of the year in A Suit of Nettles are circles within which speakers with opposed visions of language and poetry contend, as in the “July” eclogue in which Anser, the “progressive” teacher, derides Valancy (Isabella Valancy Crawford of Paisley) for praising Strictus, the teacher in her youth who taught his goslings knowledge of science, myth, history, biblical patterns and metaphors and the novels of Bronte and the poetry of Milton.  Anser scornfully replies “how useless so far as the actual living of life is concerned.”  In the “August” eclogue, this approach is reinforced in Jamie’s attack on Scrutumnus (representing F. R. Leavis) as the literary critic who is behind Anser’s point of view — a confining of literary experience to the “felt experience” of essentially rudimentary feeling and language.  Reaney, of course, could also depict what A Suit of Nettles presents as Scrutumnus’ ideal of “Pigs in the sties of Venus,” but Jamie refused to confine his poetry or limit his language to one level.  Jamie could present a flower in a corner fence on the farm more precisely than Tennyson could his “flower in the crannied wall” and as precisely as any Imagist poet.  But he moves out to include all levels of experience and, instead of limiting language to the simplest level, brings all levels of language into multiple relations through complex counterpoint.

Many of his central metaphors are circles revolving within the cycle of the year on an Ontario farm (Jamie’s farm near Stratford).  At the fall fair (Stratford Fall Fair) the circle of Western philosophy revolves in the merry-go-round and on the ferris wheel the creation myths of mankind rise and fall.  It is not surprising that Jamie rejoiced in the visions of wheels within wheels a-turning in the Book of Ezekiel, Chapter I.

The dominant stanza of A Suit of Nettles is the Spenserian Sestina, but Jamie is encyclopaedic in his use of other stanzas as well.  So is he in his use of metrical variation from the alliterative pounding of Beowulf, as in the “Drunken Preacher’s” sermon in “September” —

Lo, it was the last supper, I leader from gutter
Tell you tall and short tinkery folk gathered.
What did those white souls eat while their Lord talked:
I don’t know indeed I don’t, maybe sandwiches.

Sing to us for the frost
Is closing the pond,
The elms their leaves have lost
And the singing birds are gone.

— and through other variants such as hexameter and pentameter, as in the “May” Eclogue.  I think that Jamie, like Wagner, was striving to achieve a “Gesamtkunstwerk,” a union of all the arts, the expression of all creativity, and he certainly wrote through form after form and finally reached drama and opera to find such appropriate encyclopaedic media.  In A Children’s Story, the latest novel by A. S. Byatt, two characters are also striving to realize Wagner’s desire:

Anselm Stern said what was needed was music like Richard Strauss. No, no, said Steyning, something fairy-like, something between “Greensleeves” and The Ring of the Nibelungs (515).

And sometimes we hear in Jamie’s work this intricate, encyclopaedic sound, and hear it first in A Suit of Nettles.  Certainly we hear it clearly in The Donnellys, in Gyroscope and in Crazy to Kill.

In Imprecations in 1984, Jamie pronounces a resounding series of curses through three female voices, those of “Edith Sitwell, Judith Donnelly, and a whore on Queen St. in Toronto.”  From their energy, the speaker-poet derives the power to lay waste to those who abuse the planet and their fellow creatures, those who destroyed the Honours programme at Toronto, those traitorous teachers who tell their students not to memorize anything and rely on their own opinion, and those who use the political power of the Ministry of Education to expel poetry from the schools.  Note the emphasis upon the Honours programme — I think that I shall read that section —

Oh ye hippies and merry draft dodgers who in the sixties
Came to University College stampeding my dear old professors,
Mobbing them till they scrapped the old Honours English Course,
And gave you anything at any time:
No down payment on Emily Bronte; Virginia Woolf now,
Beowulf later on.  Communitas delenda est!
May you in Heaven be presented with harps tuned in this order:
A 2 octaves below Middle C, next F natural 5 octaves above High C …