A girl spent all day pleating a fan.
Either we have Verdun & Kursk
Or we have herbivorous people
As the she above
Who spend all day in their garden
Watching butterflies or playing with a kite
Or cutting out coloured paper
For a fan
Or a kite
Or balancing the reds of zinnias with those of amaranths,
For example that plant called Love Lies Bleeding.

I saw a field of men playing football
With a criminal’s head.
I saw a field of sunflowers wiped out
By ten thousand tanks.
I saw Aunt Marjorie’s paint brush
Destroy a knight in armour
And even a villainous peasant!
I saw our hockey player break a Russian player’s ankle!

And I saw the Fan! giant in the sky
Huge, winnowing!
I saw an armoured car drive up
To arrest an artist
Who was accounted hopelessly a- and un-political
Because he painted nothing but flowers & mice,
But of course was suddenly seen
As the most dangerous rebel in the republic.
And I saw the Fan — big, winnowing,
Make a rhapsody of a windy day,
Separate wheat from straw just like that,
And blow giants & battlefields like dead leaves away!

“The Fan” is from James Reaney’s book of poems Souwesto Home, 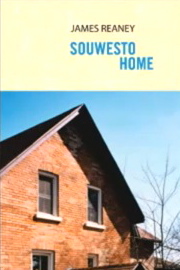