Congratulations to student Scott Summerhayes, whose screenplay based on James Reaney’s short story, “The Box Social,” is one of the Top 13 Finalists in the Canadian Short Screenplay Competition.

“The Box Social” was originally published in 1947 in The Undergrad at the University of Toronto, and then in the popular magazine The New Liberty. Here’s what Reaney had to say about why he wrote the story, in an autobiographical piece from 1992:

“Out of the deep past it somehow came to me, I think from my mother talking about the way men treated women in our neighbourhood. They never struck back; well, in my story one of them did.” (James Crerar Reaney, Contemporary Authors Autobiography Series, Volume 15, page 304.)

James Reaney’s short stories are collected in The Box Social and Other Stories, available from The Porcupine’s Quill.

♦ For more about The Box Social, see “Southern Ontario Gothic and James Reaney” from June 2015 and also The Box Social and Other Stories from May 2017.. 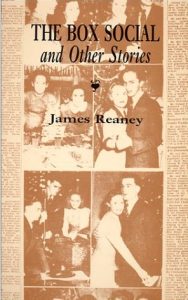